Seems like we are doing more book reviews lately, which is fine. We try to give our web visitors what they want.

Broken Trust – Muslim Feint was submitted to us by the author along with other of his books. Unfortunately, there are so many book out there that is probably the best way to get us to notice your book.

That being said, we did enjoy the other two fiction books the author submitted, Throne of Storms – Identity 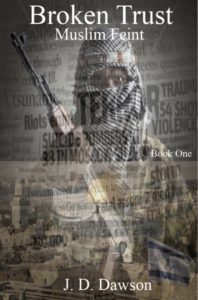 Lost and Cord McCoy – The Hanging Teacher which we have reviewed previously.

So, what is Broken Trust Muslim Feint about? Well to really simplify the premise of the book it is basically Terminator Skyview meets Indiana Jones with current political issues driving them. It also has and added post modern twist of big corporations running everything.

Broken Trust Muslim Feint uses present day political and social issues to give us an idea of what our ever divided and highly technological world with corrupt politicians running it might just be like.  The book spans multiple locations from Washington to the Middle East complete with back room political deals, terrorism and even references to our archeological past.

Here is what author put on the book jacket:

“Middle East peace is finally within grasp despite ever more violent attacks by the Muslim Dawn. However, the world’s largest corporation, Monroe Industries has other plans. Maximillian Monroe the vice president of the United States and leader of the Basics Party is orchestrating the passage of the World Protection Laws to give the government more control over the people.

At the center of Maximillian’s plan is their newly designed  biological supercomputer, Mary, located on the secure moon base Tranquility. The primary dangers to Maximillian’s carefully laid plan is his own son Alexander Monroe and a young archeologist named Marcus Trust.”

Overall, an interesting read on a rainy day or while you are on a long flight.

We look forward to taking a look at the next book in the Broken Trust Series.

Below is an excerpt from the book published with the permission of the author:

Screaming … louder … glass breaking … running … light … dark … light. Marcus sat up in bed, his heart pounding. It was a dream. Again. The same dream or parts of it. Sweat was dripping from his nose. The sheets were wet and pulled from the mattress. He held the pillow tightly in his arms. Why? Why did he have these dreams? For as long as he could remember the dreams had haunted him. He untangled himself from the sheets and swung his feet to the floor. The floor was warm, but hard; it felt anesthetic beneath his feet. Carpet would have felt better he thought to himself. But … his landlord did not believe in carpet, “too hard to clean, too dirty” he would always say.

He paused, putting his head in his hands. He still did not have the strength to stand and his head was pounding. What time was it? The sun was up. He could see the green tinted light reflecting from the white floor of his bedroom as the sun shined through his sheer green curtains.

The clock read 7:47. It was almost time to get up anyway; his alarm was set for 8:00. The last thing he wanted to hear right now was the screeching of his alarm clock. Better to go ahead and get out of bed. He pulled the sheet from the bed and wiped the sweat off his face, chest, back, and legs; then wadded it up and threw it in the corner with the rest of his dirty clothes. Wash day was Saturday. Today was only Thursday.

His bedroom, like the rest of his apartment, had only the basics in furnishings. The bedroom had a bed and a dresser. His den … a couch, a chair, coffee table and a 90” plasma TV mounted on the wall with a digital stereo underneath it. There are some things that you could skimp on, but not electronics. The floor was a white synthetic marble. The walls were painted green with green curtains. He had heard that surrounding yourself with the color green was soothing. He had hoped that it would help with his dreams. Which it didn’t. Nothing had.

Time to get ready. A long cold shower always helped. The colder the better. Marcus stood in the shower with his head against the wall underneath the highest of the three nozzles. He laughed to himself, you would think with three nozzles there would be plenty of water, but with all the water restrictions in place there was hardly enough water to wash. Having pressurized air forced thorough the pipes made it seem like there was more water, but in reality it was mostly air. He often wondered if having to take longer in the shower to get clean actually saved any water at all?

He supposed the increased shower time was at least partially offset in the time and water he saved not having to shave. Eight years ago he had the hair follicles in his face genetically suppressed. No more shaving. He turned off the water and switched on the shower blowers to dry his body. The air came through the water pipes, you just switched the water off and left the air assist on. After they automatically turned off, he stepped out of the shower and onto the floor. The floor was not cold. Most homes and apartments in Seattle had in-floor radiant heating. Much more efficient than other forms of heat and most importantly it kept your feet warm.

Marcus grabbed some clean clothes out of his closet, got dressed and grabbed an energy breakfast bar from the kitchen counter as he headed out the door. He never had been much of a breakfast person. Something fast and easy was what he preferred. The door locked automatically as it closed; there was no need for keys. The door was fully automated and keyed to the identification chip in his hand. You did not need keys for any modern lock including his pride and joy, a classic 2020 Ford Mustang. Green of course. He had to have the car upgraded to accept the chip; chips did not become standard equipment in cars until 2031. Many people still had cars made before 2031 that used keys, but he really enjoyed the convenience of the chip.

The chip did everything. In 2016 the chip was first introduced and was required to participate in the free government run health system. The government said it was the only way to track the program and make it cost effective. The chip stored all your medical information and was used to track your usage of the system. Then in 2020 bank accounts were added to reduce credit and identity theft. In 2022 the chips were tied to global positioning satellites to help stop an increase in global kidnappings and in 2025 the chips began being used for locks and various other devices that previously required keys or combinations. By 2031, the chips were mandatory on all new cars and in 2033 paper and coin money was no longer being printed in most developed countries. It was much easier just to use the chip. It did not take the government long to realize how much cheaper it was to not have to print paper money any more.

Marcus placed his hand on the driver side door of his car, the car beeped once and the door popped open. He sat down and the automated seat comfort control adjusted the seat to his body and moved him into driving position. He placed his hands on the steering wheel and the electric engine began to hum. His car had a 4th generation Z21 electric engine. It was capable of a maximum speed of 120 mph and could maintain that speed for two hours. At a cruising speed of 60 mph, the engine could run for ten hours. During the day, the cars solar cells would recharge the batteries and extend the range of the engine. At night the car could be quick charged at various car power stations in about twenty minutes. A new engine released last year, the MNR2040, has twice range of the Z21 and a maximum speed of 150 mph for two hours. MNR stood for Monroe Industries, the company which held the patent for the engine and the 2040 for the year the patent was issued.

It took about one hour for Marcus to drive from his apartment to work. He worked at Monroe Biological Technologies (MBT) located just outside of Seattle. He was an archeologist for the company. Although he had never been quite sure why they needed an archeologist, he was grateful that they had funded his University studies and now he was under contract to work for them for four years. This was a standard practice; college had become so expensive that very few people could afford to attend. About fifteen years ago, Monroe Industries started a corporate funding program and other companies quickly joined in. It was a great arrangement for the corporations and the universities. The universities filled their classrooms and the corporations chose the best and brightest from the high schools, decided what they would study, sent them to school and then the students had to work out a contract with their corporate sponsor. Marcus was not complaining though, he had always enjoyed history and archeology, plus MBT paid him much better than anyone else would have. He only hoped that after his contract was up at Monroe, that they would renew him indefinitely. There was a long time before that would be an issue; he was only two months into his current contract. So far … all he had done is write reports about the effects of urbanization on South America, the Roman influence on Egypt, and the cultural effects of Alexander the Great on the old world. He could not see why they would continue to pay him to write reports that had been written thousands of times before, not that he was complaining.

Marcus had found that the hour drive to and from work gave him time to think and relax. It had actually been a blessing not living any closer to MBT. Of course driving now was much easier than it was say ten years ago. The government had installed electronic sensors on all the interstates which allowed cars with receivers to drive themselves. All you had to do is set the speed you wished to travel and the destination, then the car does the rest. The car had sensors on all sides that maintained proper distances from other cars. The only thing you had to do after the system was initiated was push a continue button on the dash every five minutes, the last thirty seconds would audibly countdown to remind you. This made sure you did not fall asleep while driving and end up at the Canadian border. Of course, that could not really happen since one of the requirements was that you entered the destination before the automated system would engage. But … government safety standards still required you to be awake while driving. If you did not press the continue button, the car slowed and pulled off to the side of the road.